You’re probably not going to read to the end of this article. Research suggests that you’ll read the first paragraph, then get bored, and want some immediate stimulation. You’ll scroll down for a pretty picture, and soon your limited attention will be completely stolen by Snapchat. What’s worse, while all of this is happening, you’re becoming less and less happy with life in general. 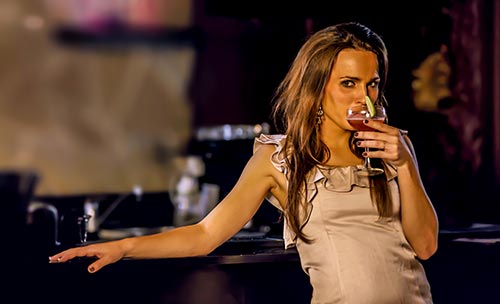 Truth is, you really wish you were lounging next to your friend, sipping a gorgeous margarita in Cabo. After all, she’s there RIGHT NOW with other friends, and apparently you didn’t make the cut for the trip.

But you’ll be okay. Because you know what? Your latest selfie on Facebook (that one at the fancy restaurant last night) is getting really close to 100 likes! Most people are saying you look sooo cute!

Oh… And… Your package from Amazon is “on the way” and will be here before 8 p.m. It’s your new sunglasses! They will certainly make you look AMAZING. Life is going to be really awesome again… for a few hours anyway.

The last 12 months have been an interesting ride for my family. We’re experiencing life with a pre-teen, mixed with technology, new relationships, changing hormones, growing siblings, increasing school demands, and so on. We’ve had to deal with internet overuse and abuse, by both the children and the adults in the household. And many times I’ve shared my theory of how modern relationships form shallow / fragile roots thanks entirely to current technology. I talk about it whenever I can, to any audience.

I’m no doctor and far from being an expert in this area, but I have seen positive shifts in my child’s behavior in the past year. Back then she had frequent internet access (iPad only) and spent quite a bit of time alone, texting with friends via Google Hangouts and iMessage. She was more combative and argumentative. And she was often sad. Unfortunately some negative things happened, that fortunately we caught early. That led to limited internet access.

Today, she has no ability to text with any regularity (we completely disconnected the iPad from the wi-fi).

She has different friends today as well. Last year’s friends no longer contact her because she’s not on Hangouts. This year’s friends call her on the landline and they have a fantastic time talking and laughing, sometimes for a couple of hours. She’s also no longer a witness or participant in the online bullying and foul language that I’ve read in the app’s archives.

My own experiences have led me to conversations with other parents. I’ve heard a wide range of comments both good and bad. 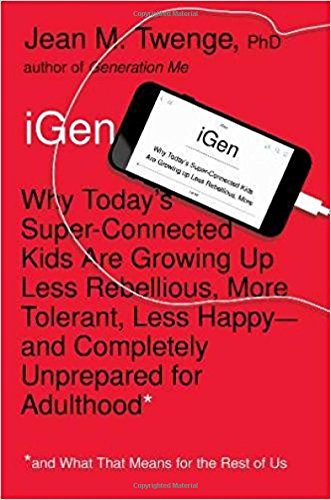 We don’t have cable television at home (going on six years now). But we do stream video from YouTube onto our TVs. Last night, I was “flipping” through recent news programs and stopped at an interview (Fox News / YouTube) with Dr. Jean Twenge (LinkedIn), professor of psychology at San Diego State University, and author of iGen: Why Today’s Super-Connected Kids Are Growing Up Less Rebellious, More Tolerant, Less Happy–and Completely Unprepared for Adulthood–and What That Means for the Rest of Us (Amazon).

After watching the great interview, I looked up Dr. Twenge on Google and found her article in The Atlantic, titled “Have Smartphones Destroyed a Generation?” For those of us with short attention spans (myself included) you’ll be happy to know the Atlantic article seems to be a short recap of the book!

Fair warning, the Atlantic article is much longer than your average internet news post. Admittedly, as I read it, I found myself very interested in the content while also thinking, “Wow, how long IS this?”

(Isn’t it funny how we just want the twitter-sized bullet points magically transported into our brains without taking the time to just sit back and read!)

The article points out that since the iPhone was first released in 2007, youth and teens:

These are massive changes over a very short 10-year period.

Dr. Twenge writes, “The correlations between depression and smartphone use are strong enough to suggest that more parents should be telling their kids to put down their phone.”

My dad and your dad used to say things like, “Back in my day, an ice cream cone was a nickel!” Yes, times have changed. Smartphones, apps and other technology have invaded our lives and they’re just not going to go away. So what is the best path moving forward? How do we NOT destroy our kids, while also teaching them how to use modern communication tools? Do we ban devices until some magical age of reason (which really does not exist)? Do we teach moderation? Do we force activities between friends in-person? Or do we just turn a blind eye?

I believe that elementary, middle and high schools need to recognize this serious threat to our society, and ACTIVELY step in to teach “tech responsibility” relevant to mental health, relationships, social skills, and so on. They should also take an interest in advising parents, and encourage technology-free activities with friends, at home, and on vacation. They could showcase the many benefits of just being together and spending time with other human beings in-person. In her article on theconversation.com, Dr. Twenge writes, “Spending less time with friends means less time to develop social skills.”

Congratulations for making it to the end of the article! Share your comments below, or feel free to use your actual VOICE to call us at (858) 877-3733. You can reach Dr. Twenge via her website, www.jeantwenge.com.