What a blessing it is to have been MENTIONED in the HISTORY of St. Charles Borromeo Parish & School! Granted, it’s the last two sentences… but we’ll take it! We would not be where we are today without the strong Catholic foundation gained at St. Charles in Gladstone, Missouri.

The parish was organized in the spring of 1947. Fr. Maurice F. Wogan was assigned by Bishop Charles LeBlond to take a census. The area to be surveyed was a five square mile area overlapping the county line between Clay and Platte counties. He found about 85 families.

On April 6, 1947, Easter Sunday, the congregation gathered for their first celebration of the Eucharist as a new parish in the Englewood Public School Auditorium. This school was located on the southeast corner of North Oak and Englewood Road. Later, a tavern on Oak Street was used until the parish could obtain its own church.

A surplus Army chapel, a Quonset building, was brought from Coffeyville, KS in April 1947. Parishioners along with Fr. Wogan went to Coffeyville, disassembled the building and reassembled it on church property. The new building was used for the first time for midnight Mass on Christmas, 1947. Byron Bales directed the choir of 17 voices and 12 year old Bernadette Tiedtka began her career as a church organist. On February 14, 1948, the building was dedicated. The parish was named in honor of Bishop Charles LeBlond. Fr. Wogan lived on the south end of the first floor until the rectory was completed.

In April 1949, work was begun on the rectory and Fr. Wogan was able to move in during the month of August. What was built at this date came to be known as the “center section.”

In the summer of 1949 the first floor of the church was renovated into three classrooms. In September 1949, the Sisters of Charity of Leavenworth opened the school with 45 students enrolled in six grades. The Sisters moved into the pastor’s former quarters. On January 21, 1951, ground was broken for the new convent. By August, the five teaching Sisters were able to move in. This construction constituted the south half of the building which was the convent and is used for parish offices as of July 1990. That September, 120 students enrolled in the school.

In November 1951, the first associate pastor was assigned to the parish – Fr. Ralph Siebert.

In June 1952, work was begun on the school building. On March 22, 1953, the building was dedicated. At that time the basement and first floor of the brick building were built. At the cornerstone laying the societies of the parish, Holy Name, Altar Society, School Guild, Knights of Columbus Tri-County Council 3414, the 170 children of the school and the Sisters made up the procession. At the time there were 300 families in the parish.

On October 15, 1952, Bishop John P. Cody presided at a parish liturgy for the first time as Bishop of the St. Joseph Diocese.

On March 1, 1955, the St. Charles Cub Pack and Scout Troop 180 were established. Bill Spiegelhaltar and Msgr. Wogan were the organizers.

Ground breaking ceremonies for a new church took place on September 4, 1955, and it was dedicated on September 3, 1956. The church was built in a “contemporary” style, characterized by horizontal lines rather than the conventional vertical lines of usual church architecture. “Everyone agrees that there is the Spirit of Piety, the Atmosphere of Religion and the Charm of Simplicity embodied under its broad roof.” (Church dedication pamphlet, 1956.) It is constructed of colonial brick and Carthage limestone.

The nave of the church can accommodate 650 persons. The cost of the church was $300,000. Shaughnessy, Bower and Grimaldi were the architects. J.E. Dunn Construction Company served as general contractor.

A curious thing about this building is that it straddles the border line between two municipalities. The sanctuary of the church is in Gladstone and the nave of the church in Oakview. To build the church separate building permits were required.

In 1955 the parish had 650 families, three priests, eight sisters. At the same time additions were made to both rectory and convent. Four rooms were added to the rectory to accommodate another priest. In 1958 a junior high wing was added to the school.

In May 1957, the Knights of Columbus of the Tri-County Council had completed the removal of the old St. Charles Church, enabling contractors to construct the new school addition of six rooms. The Knights, given the building for its removal, planned to reconstruct it on their new grounds on Old Pike Road.

In May 1960, the cafeteria was discontinued so the space could be converted to classrooms.

In 1963 Fr. James Lyons became the second pastor of the parish. A Doctor of Theology and educator, he led the parish through the “changes” of Vatican Council II a “Tithing” Program in 1968, “Reaching Out Education: in 1969, “Saint Charles Studies” in 1972, “Women in Ministry” in 1975 (15 women took a two year program to take on the major staff roles of the parish), and finally “Extended Learnings” in 1977. The people assumed leadership with accountability and competence.

In 1963 a second floor was added to the school allowing a peak enrollment of 960 students in the 1964-1965 school year. Classrooms were created in the basement of the church, bringing the total number to 21. In July 1963, a prefabricated structure was purchased from the Nashua Manufacturing Company to provide for an additional classroom.

In December 1964, Giudici Brothers Marble Company moved the marble altar from the back wall of the church for Mass facing the people.

Through the 1970s the school dropped to a low of 320 students in 1976. A School of Religion began to serve over 600 public school students.

During this time the parish encompassed some 48 square miles and grew to 1650 families. A separate Catholic community (eventually to be called Good Shepherd Parish) was established in Smithville in 1972 and allowed to grow and save for a future church. St. Andrew parish was created from the east side of the parish in 1966, with Antioch Road-North Prospect forming the western boundary of the new parish.

In November 1973, the basement of the rectory was remodeled. The meeting space was named the Msgr. Wogan Room, in honor of the first pastor. In September 1977, a kindergarten with half-day sessions was established.

When Fr. William Bauman became the third pastor in 1978 the parish was bursting at the seams. In 1980 two new parishes were created within its boundaries. The Smithville parish was canonically established. Holy Family parish was established and the territory north of 80th Street was given to that parish. St. Charles parish was reduced to an area of some four square miles with 1320 families. However, by 1983 there were again 1650 families.

On September 2, 1980, Frank Grimaldi was engaged to redesign the basement area of the church. He was able to subdivide the space and design a new entrance ramp. A.L. Huber and Son Construction Co. served as general contractor. The cost of the project was $90,153. Late in 1980, Borromeo Hall under the church, was renovated into a dividable space with a ground level entrance. Under the leadership of Sister Kathleen Coman, SCL, the school returned to its full capacity of 400 students.

To ensure the success of the educational program used at the school, grade size was limited in the school to 50 students per class and 40 in the kindergarten. Since then the school has run at capacity. In 1983 there were 445 students in 24 classrooms.

In March 1985, a new 12 rank organ built by Fred Cool of the Temple Organ Company of St. Joseph was installed in the church. It was dedicated on April 14 with a recital by Sister Claudette Schiratti, RSM. Planning for the new organ had begun in August 1982, with a committee appointed by the Spiritual Council: Bob and Mary Kemp, Irmagard McClurg, Mary Kay Murray and Ellen Butler, John Baker, Leary Skinner, and Sister Claudette. The flute pipes were made by Gebruder Kas, of Bonn, Germany and the trumpets by Suddeutsche Orgelpfeifenfabrik, Freiberg, Germany. The firm of Justin Matters of Rapid City, SD made the 24 aluminum pipes of the 16’ Gedeckt and Principal, the tallest pipes showing in the frontal display.

A multipurpose building was begun in the fall of 1985 and dedicated on September 14, 1986. The building includes a gymnasium, a kitchen, and space for parish meetings and events. The architect was Mark Spurgeon, a member of the parish, and Lawhon Construction of St. Joseph built the building.

In 1991, the Rev. John Wolf, C.PP.S., began pastoral duties at St. Charles as the Society of the Precious Blood (Congregatio Prezziosisimi Sanguine, or C.PP.S.) accepted from the diocese the full responsibility of parish leadership. In addition to the continued flourishing of pastoral ministries, attention to the physical plant and renovation projects marked Fr. Wolf’s pastorate.

In 2007, the Community of the Precious Blood returned the pastorate of the parish back to the Diocese of Kansas City-St. Joseph. The Rev. Kenneth A. Riley was appointed our new pastor. A parish synod was held February 26-28, 2009.

In 2012, the Rev. Joseph Totton was appointed pastor. Efforts began in 2014 to improve the school facilities, and the health and well-being of our students and staff. Phase one of the School Maintenance Upgrade began on June 2, 2014. Contractors completed work to retrofit the school building with infrastructure-electrical circuity and duct work to accommodate plans for a modern HVAC climate control system. Summer 2015, 100% of the school became air conditioned.

In 2016, windows were replaced in the foyer, lobby, and first floor (front and back) of the school. A new front door with security passage was also installed.

In 2016, Father Donald P. Farnan became pastor at St. Charles Borromeo Parish. In November 2016, St. Charles embarked upon a three year revitalization campaign to assure sustainability for the future. The campaign is three-fold: 1) repopulate and rebrand the school; 2) repair and rebuild the facilities; 3) reinvigorate the faith community to return and rejoice.

In April 2017, the school’s guest lobby and entry hall was remodeled. An art display wall was built and new flooring was installed. May 29, 2017, work was begun to replace the second floor, east wing school windows. Janssen Glass served as general contractor. Additional projects include a new principal’s office, conference room, and paint. 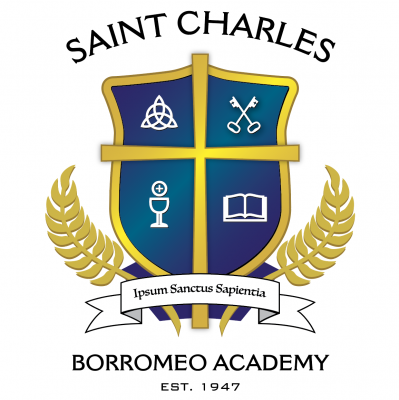 On May 24, 2017, St. Charles Catholic School closed its doors on the last day of the 2016-2017 school year with plans to reopen under the new name of Saint Charles Borromeo Academy, a Catholic, classical, diocesan school, with the first classes beginning in the fall of 2017. Borromeo Academy extends the mission of the Church in forming true disciples of Jesus Christ. Through a Catholic Classic Liberal Arts education centered on Christ, the academy provides an integrated approach fostering a love for truth, beauty, and goodness, and seeks to instill a natural desire for wisdom and virtue in all students.

In addition to the new name and curriculum, new uniform plaid was selected and a custom crest was designed by Faith in Marketing (shown). Thom Hiatt, the co-founder of Faith in Marketing, graduated from St. Charles in 1989.

EDITOR’S NOTE: As a point of accuracy and giving credit where due, the new academy crest was envisioned by the very talented parish Communications Director, Gina Rupnow. It was designed by Melissa Hiatt, Director of Design & Programming at Faith in Marketing. The Hiatt’s are the founders and owners of Faith in Marketing, the best full-service Catholic communications company — based in sunny San Diego, California.